Rails 4 &amp; 5 Engine providing private and public messaging for any object, such as Users or Groups

MessageTrain is a Rails 4 and 5 Private Messaging Gem that uses bootstrap to send and display private messages from one user to another. It can also be configured to send messages to a user collective (such as a certain Role or Group of users).

Messages can be saved as drafts instead of sending. Message composition features type-ahead completion for recipients, wysiwyg html bodies, and an arbitrary number of attachments. Messages are grouped together into conversations, and allow valid senders to reply to a given message. Any given conversation can be ignored if it is no longer of interest to the user, at which point no further messages will be received in that conversation. The 'read' or 'unread' status of messages is tracked automatically, and can also be changed manually by the user.

Conversations are grouped into various boxes, depending on their status for that user: in, sent, all, drafts, trash, ignored. Any message can be trashed by the user, at which point the user has the option to permanently delete it.

Email messages are sent when a user receives a message, either directly or through a collective (unless they have unsubscribed from those notifications or all notifications). 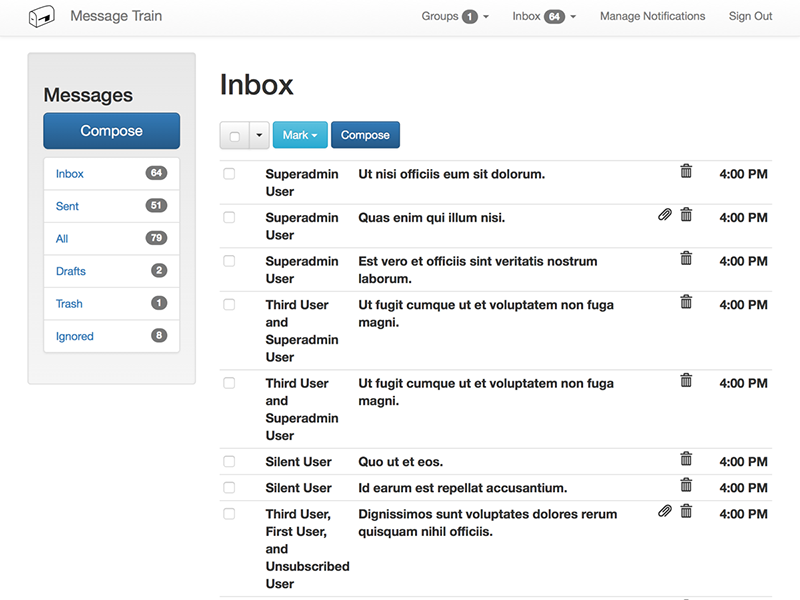 Then, run the install generator:

And then run rake db:migrate.

Next, add to your models, each of which will need some kind of display name column and some kind of slug (could be the same). See below for the options for this mixin:

In your layout, supposing you use haml:

If you use bootstrap, you can use the built-in bootstrap sidebar menu (makes use of bootstrap_leather, which is a dependency of this gem)

If you don't use devise with its current_user method, you will need to configure MessageTrain to use whatever method you use:

only
A symbol or array of symbols to be the only relationships used, which can include: [:sender, :recipient]
except
A symbol or array of symbols not to create relationships for, which can include: [:sender, :recipient]
valid_senders
A method name to call for a list of valid senders for this model
collectives_for_recipient
A method that, when passed @box_user, will return a collection of valid instances of this model for that @box_user to receive. Probably a scope. (e.g. it might return groups that the user is a member of)
valid_recipients
A method that returns a collection of valid recipients for this model. default: nil
name_column
The column by which to name and find this model. default: :name
slug_column
The column with the short, typeable form of the name. default: :slug

By default, the address book will contain all objects of the current_user_method object's model type. To change this behavior, define an address book method on your recipient models, something like this:

And in your model:

Or in your initializer:

Version 0.4.0 introduced database changes to the foreign key columns to work with Rails 4.2.5. Let me know if you need help migrating your app to the newly named foreign keys.

A new config variable was added for the user model, which will be used to generate a new user if the user is anonymous.

New columns were added with version 0.2.0, so when upgrading be sure to install the latest migrations:

Running this command is harmless if the migrations are already installed, they will simply be skipped.